One notable disadvantage of huge (someone committed a livecd image) git repositories, is an apparent

memory usage of git repack even if I tell it not to with --window-memory. 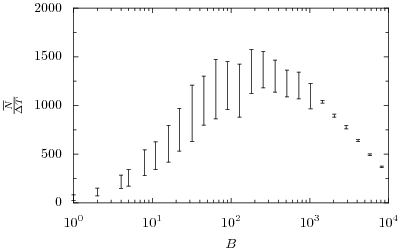 at the same time with 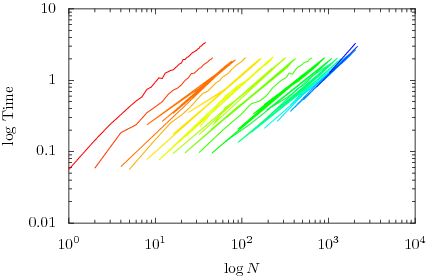 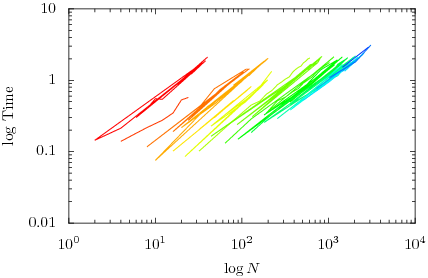 As you can see, a higher value of

causes the graph to shift to the right which means more

for the same time. Bulk update really does make a difference. Or non-bulk-update really sucks. Also adding threads does help a bit, but not as much as expected.

There are some more interesting graphs to plot (

(For those interested, the raw data from which these graphs were plotted.)

CouchDB is a non-relational database which uses MapReduce inspired views to query data. There are lots of cool things to tell about its design, but I rather want to talk about its performance.

Today I’ve been busy hacking together a little script to import all e-mails of a long e-mail thread into a couchdb database to write views to extract all kinds of statistics. I already imported these e-mails into a MySQL database a few months ago, but was quite disappointed by the (performance) limitations of SQL. The e-mail thread contains over 20,000 messages which weren’t a real problem for MySQL. When importing, however, couchdb was adding them at a rate of only a few dozen per second with a lot of (seek)noise of my HDD.

So I decided to do a simple benchmark. First of, a simple script (ser.py) that adds empty documents sequentially. It’s averaging 16 per second. It occurred to me that couchdb waits for a fsync before sending a response and that asynchronously the performance would be way better. A simple modification to the script later (par.py) it still averaged 16 creations per second.

I guess, for I haven’t yet figured out how to let straces tell me, that it’s the fsync after each object creation which causes the mess. couchdb itself doesn’t write or seek a lot, but my journaling filesystem (XFS) does on a fsync.

Can anyone test it on a different filesystem?

Update Around 17/sec with reiserfs.

Update I had some trouble with the bulk update feature. I switched from svn to the 0.7.2 release. I got about 600/sec, which dropped to a steady-ish 350/sec when using sequential bulkupdates of 100 docs. Two bulk updates in parallel yield about 950/sec initially, dropping to 550/sec after a while. Three parallel updates yield similar performance.